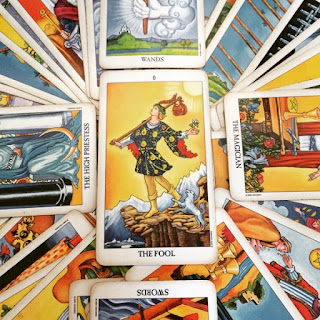 Facilitating a tarot workshop is daunting and exciting in equal measures. It's always good to share something so close to my heart and in presenting my personal take on the Tarot, I'm also sharing a large part of my own inner journey. That said, it's also nerve wracking to stand in front of a group of potential strangers in the hope that what you have to offer will be worthwhile to them.

This is why I want to thank all the men who attended my gay men's tarot workshop in London last Wednesday. Working with you was a joy and from what many of you said afterwards, I think you enjoyed our exploration of the cards as much as I did. I look forward to catching up with you all in the future (both individually and collectively) and  do keep me posted as to how you're getting on as you journey further. In the meantime, I'd like to make a couple of recommendations for further reading as some of you asked for these at the end of the evening. 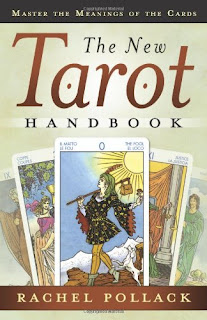 During our workshop, we used the Rider Waite Tarot deck. Created in 1909, it's become the most widely known deck in the world and  the blueprint for most of the decks that have followed. Learn with the Rider Waite deck and in future you'll find it easy to adapt to most others. For further reading, I'm recommending Rachel Pollack's New Tarot Handbook (Llewellyn. Reprint Edition - 2012). Rachel is widely viewed as the mother of modern tarot, having worked with the cards for 45 years. She's also a Nebula Award nominated Sci-Fi author and was an English Professor in the sixties and seventies. Her understanding of the tarot is in my opinion, unparalleled yet her books are easily approachable and of great value to beginners and the experienced reader alike. Make this your first port of call as Rachel's wisdom will give you a firm foundation to build on. You can purchase this book from Amazon by following the link below:

Secrets of the Waite-Smith Tarot 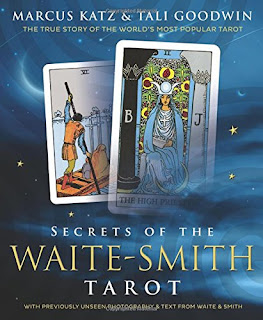 If you're fascinated by the rich symbolism and beautiful artwork of the Rider Waite deck, you may wish to explore a recently published book by authors Marcus Katz and Tali Goodwin. The Secrets of the Waite-Smith Tarot (Llewellyn. 2015) is a groundbreaking, in depth guide to the Rider Waite deck, delving into the deck's history and creation. Within its pages you'll learn much of the stories behind individual cards and how artist Pamela Colman Smith's background in theatre fed into so many of the card scenes we now take for granted. This is a fascinating book that sheds new light on what have become classic images. If you enjoyed Rachel's book, Marcus and Tali's offering will significantly enhance your understanding of the deck. It's also available on Amazon UK:

The Secrets of the Waite-Smith Tarot by Marcus Katz and Tali Goodwin. Purchase from Amazon UK. 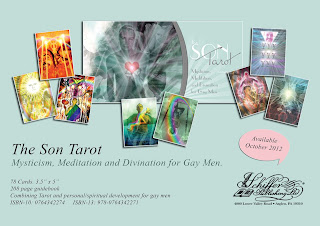 Finally, we come to my own deck and book, which many of you saw and chatted to me about during the workshop. With the Son Tarot (Schiffer Publishing. 2012), I've created a deck and book set specifically designed for gay men to use as a personal development tool. Taking your knowledge of the Rider-Waite tarot, you'll find yourself easily stepping into the system of this deck as I've used traditional tarot concepts and adapted them to fit our aspirations, experiences and hopes. From coming out to self acceptance and body image issues, I've attempted to show our daily concerns reflected in the cards. Once again, it's available through Amazon UK but you may want to check out the 'used and new' section as several Amazon affiliated dealers currently offer the set at more competitive prices.

Once again, I can only say thank you to those who attended the workshop last Wednesday. I had a wonderful time facilitating and as I always find when facilitating these events, I learned as much from you as you did from me.

For those of you who couldn't make it, particularly those who had to cancel last minute due to the train strikes, don't worry as Andy and I are looking to organise the next tarot workshop very soon. I'll keep you informed as we work to schedule a date and in the meantime, look out for 'Love, Sex, Gay Men and a Deck of Cards' in your Meetup events listings.....