The Healing Light Tarot is to be published! 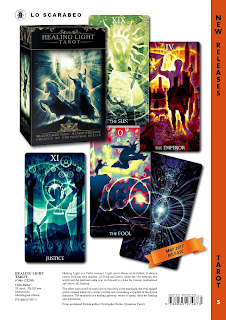 It's wonderful to announce my new tarot deck and book set is to be published by Lo Scarabeo in 2017!

There couldn't have been a better outcome for all the hard work that's gone into this project. I've worked with Lo Scarabeo previously as they published the Quantum Tarot 2.0 by myself and Kay Stopforth back in 2010. That process was both positive and rewarding and it's a joy to be working with L.S. again, knowing full well the effort and dedication they will pour in to making this deck a reality.

The genesis of the deck has been more complicated than any of my previous projects and it's nothing like I set out to originally create. It started back in May 2013 when I travelled to London to receive a Kindred Spirit Magazine Award. A chance online encounter led to me meeting up with an old University friend who I hadn't seen for 19 years. That friend was Petronella Devaney whom I subsequently co-facilitated a Sacred Tarot Workshop with. In all the time we'd been at College together neither of us knew the other had a dormant interest in Tarot. Fast forward 19 years and the pair of us had re-discovered the cards many years before, so it wasn't long before we began discussing collaborations.

Our Sacred Tarot Workshop was formulated very quickly but we also discussed the possibility of a new collaborative tarot deck and companion book, centred around the concept of the Healing Mandorla. Mandorla is the almond shaped space created by the overlapping of two circles. The Mandorla is seen frequently in Western Sacred Art, particularly in relation to the Virgin Mary or the Risen Christ. It even found its way into the traditional Tarot as the oval shaped wreath on the World Card. You could say the Mandorla is the healing space created when the the spheres of the material world and the spiritual world overlap.

We began work on both projects within a couple of months but though the workshop pulled together quite easily, the deck proved more elusive. I began hand drawing and painting the cards but the results just didn't feel right. Likewise, Petronella produced several written commentaries on individual cards which in themselves were brilliant but ultimately, our individual visions weren't connecting, leaving us both feeling frustrated and disappointed.

Added to this, circumstances were about to change with regards to Petronella's work and her recent ordination as an independent Christian Minister. We completed our first workshop with resounding success but found ourselves unable to firmly commit to more in the near future.

There came a day of total frustration when I'd scrapped the latest attempts at both the Fool and the Tower cards. I'd come to the conclusion it just wasn't working. Petronella had reached the same conclusion yet despite this we both knew that we'd been drawn into collaboration for a purpose. What made me think again was the design I'd created for our Sacred Tarot Workshop flyer.

The flyer was a new depiction of the World Card, showing the traditional hermaphrodite dancer enshrined in a Mandorla atop of the World Tree. Rummaging back through archive files of unfinished work or abandoned projects I realised I had the basis for at least seven or eight more cards so I began adapting these designs for a totally new deck. It wasn't our collaborative deck by any standards but I knew I had to continue. Furthermore, it was a humbling joy to have Petronella's blessing as I continued along this new path; one she knew I had to pursue on my own.

At this stage, it's as if the deck had been hiding behind the scenes just waiting to burst out and the project gathered momentum with astonishing speed. I attended a Radical Faerie Summer Solstice celebration around that time and much of the energy and feel of the cards is grounded in my experiences there. I created header illustrations for the Albion Faeries website a week or so after the gathering and it was these that firmly established the tone and style of the deck illustrations. You could say that the deck belongs to the Faeries. After all, there's so much of their Solstice energy and celebrations echoing through the artwork. Leaf through my Suit of Wands and you'll get a good sense of the magic surrounding our Midsummer bonfire.

A symbol of healing

I've included a Mandorla in the design of each card and it's placement shows where I feel the healing message of each card lies. The Mandorla is also a powerful symbol of the Divine Feminine, so the healing energy of these cards is meant to be gentle and nurturing. They connect to the traditions of the Goddess and also to "Sophia", Divine Wisdom in feminine form.

The deck also celebrates the Celtic "Time between Times". This was the Celts' term for Dusk and Dawn. The time when it is neither night or day. These were the times the Celts felt the veil between the physical and spiritual world was at its thinnest. The Time between Times was the time for visions, revelations and Divine encounters. To celebrate this, I've designed the cards to reflect the twilight. They scenes all occur in a space that's in between; neither night or day. Once more I'm drawn back to my Midsummer bonfire experience, where the dusk drew right into the late evening and darkness never fully engulfed the horizon before the light began to grow again. Of all the moments in my life, Midsummer 2015 is where I felt the veil was at its thinnest and I hope that glimpses of what I saw that magical night will come through these new cards to whoever uses them in the future.

So much of this deck's spirit comes from my connection with the Radical Faeries of Albion. It's no accident therefore that I was at an Equinox Faerie gathering when Lo Scarabeo contacted me to express their interest in publishing the deck. Making that announcement to the same people who fuelled the fires of the deck, in the place that had become its spiritual home was one of the happiest moments of my life. The project had come full circle.

A Mandorla for both our visions

My vision for the Mandorla has been fulfilled, but what of Petronella's? Like me, she had to step into our collaboration to discover its purpose was to seed something bigger and more important than she could have foreseen. In doing so, the Mandorla has become the focussing symbol of her ordained ministry and is included in the name for a new initiative she will be shortly unveiling. Our friendship is closer than ever as a result of this strange path we've taken. We had to journey together for a short while, in order that we encounter our individual destinies.

I look forward to this deck being published. It's not just from my heart; it's from my soul too. As for its dedication, that's straightforward and complicated at the same time. Primarily its for Petronella, for after all, she's the deck's Godmother. That said, as always there's a nod to my parents whose support and love underpins all that I do. There are also the incredible individuals I've met through the Albion Faeries whose energy weaves its way through these cards. Amongst others I think of Beverley* as a reflection of the nurturing Mother Goddess, Ananga* as a channel for the spirit of the Wildwood and  Lulu*. who more than anyone I've ever known sits on the bridge between the two worlds, guarding the veil.

Finally, this deck is for fond remembrance of Nadine Bernadette Roberts, who left this world all too early in the eyes of those who knew and loved her. She was the embodiment of fun and wonder and I hope she would have approved of these cards.

* These are Faerie names, not real names. Each member of the community adopts a Faerie name, either something of their own choice or in my case, a name that was gifted to me. They are always symbolic on some level. Faerie names are only kept for as long as the individual chooses. In many cases, they change with changing experience, personal revelation and personal growth.