Prudence: The quality or fact of being prudent, or wise in practical affairs, as by providing for the future. Caution with regard to practical matters; discretion. Regard for one's own interests. Provident care in the management of resources; economy; frugality.

Frieda Harris's realisation of the card for Aleister Crowley is a beautiful and apt one. It shows and exotic flowering plant with each of its eight flowers containing a disk/pentacle at its centre. Plants must be nurtured to grow and thrive. In the wild, the weather conditions must be right, rainfall must provide enough water and the soil must yield the correct nutrients for the plant to thrive. In a domestic setting, the houseplant must be cared for and watered by its owner for it to grow and blossom and its this very care that embodies the quality of Prudence. Fail to water or feed the plant and the plant will wither. By contrast, the skilled horticulturalist will bring forth flowers and fruit in abundance. That the disks are shown in the centre of the flowers is no accident. This is the reproductive centre of the plant and as these flowers are pollinated, new seed will be come forth and the plant will multiply 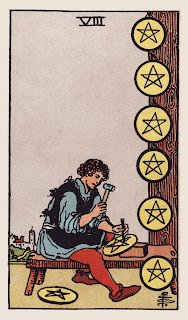 My own version of this card, created for the Healing Light Tarot has been loosely based on the Rider Waite Tarot version by Pamela Colman Smith, mainly because I've always admired her ability to convey the Golden Dawn card meanings through practical imagery. The Pentacle itself is a manifestation of the power of Earth, so the skilled craftsman who creates these magical emblems from clay, wood, metal or stone is symbolically manifesting Earthly power. On a practical level, the craftsman creates something of value; something that at some stage he'll sell for money as a product of his work. This is the wise use of one's talent to practically provide for self and family; the earning of a living wage by the skills given to you.

Pamela's choice of of the woodcarver is an inspired one, because the very skill of his hands is also a manifestation of prudence. Each tap of the hammer on the chisel is both cautious and calculated. A single mistake and the design could be marred at best, destroyed at the very worst.

My card shows a stonemason creating the same designs on the sheer face of a monument. There is no room for error.  A single slip of the chisel and the design is ruined, not just for one pentacle, but for all eight as they are all part of a unified work of art. The Mandorla halo about his head shows there is healing power in the slow, calculated thought that controls the action of his hands. His prudent restraint and his patience allow his skills to flow, and its this very process that ultimately will put food on the table and money in his pocket. 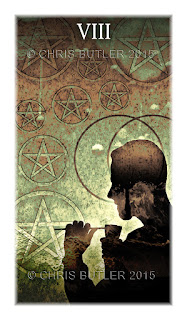 The message of this card is simple. Act with patience and act with restraint. Gifts and talents must be channelled with care. Your works may only emerge slowly but it's the best way to guarantee they will emerge to their full potential. There's no need to rush.