Water of Earth. The Queen of Pentacles. 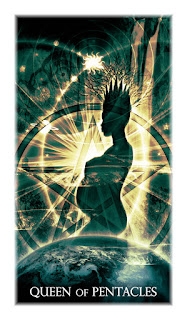 As I write this, we are a few days away from giving our first Sacred Tarot Workshop in London (6th June), and the choice of card for this blog entry is important to us both. The Queen of Pentacles is of great significance to myself but especially to Petronella, who identifies personally with her. Furthermore, this Queen and Mother of Earth has been our guiding principle as we've put together our Sacred Tarot collaboration and planned this first workshop. I knew last week I would blog about her on the final run up to the workshop but as is often the case with the Tarot archetypes, she decided to take on a life of her own and manifest herself in picture as well as words.

As I pondered what to write I began to realise this blog entry would be birthed via the process of illustrating the Queen of Pentacles for my forthcoming deck. She is the first of the new Court Cards to be completed and she sets the tone for the others yet to come. As always, pictures speak louder than words and having birthed the image I can now give voice to my inspiration.

Water in the earth

The Queens of the Tarot Courts represent the watery aspect of their respective elements so the Queen of Pentacles represents the watery aspect of Earth. Figuratively speaking, she is the soil saturated with nourishing groundwater or the Earth washed by replenishing streams. The Earth may be the medium in which plants grow but it takes water to promote growth and liberate the soil's nutrients. Dry soil becomes arid and will eventually crumble to dust but soil with a healthy amount of water within its structure will remain cohesive and bring forth greenery and life.

The watered Earth is a womb for life. Tiny, fragile seeds are fed and protected beneath the surface until they can grow towards the light, becoming strong plants. In a similar way, the Queen of Pentacles is a symbol for personified protection and nurturance. As a person, she creates a safe space around all who come within her sphere of influence. This is a woman whose love translates to practical, material concern.

I've tried to represent these aspects within the new design. The Queen emerges from the planet Earth itself, linking her to the Greek Mother Goddess Gaia - Goddess of the Earth. She sits within a cosmic Mandorla, representing her healing sphere of influence, and she also sits at the centre of a giant Pentacle, symbolising her realm of rule. The Queen is pregnant and her arms are clasped gently over her stomach. She nurtures and protects the life within her just as she nurtures the subjects within her sphere. Her crown is a symbol of growth and facility, for its jewelled spires become the branches of a tree as they divide and grow.

As Gaia, she needs to be nurtured  by the light and warmth of the sun as much as she gives nurture to her children and subjects. The blazing Sun is behind her and an orbital map of the Solar System revolves around the highest point of the Mandorla. This depiction of the Solar Family shows the Earth as one of many planetary brothers and sisters. Similarly, The Queen of Pentacles is part of a wider family. Indeed, the nurturing, fruitful concept of family is at the very core of her existence. She is Mother, Daughter, Grandmother, Ancestor and Descendant in the same way that a planet is the child of a star, a star is a child of a nebula and a nebula is born of the galactic womb.

Water from the stars

To remind us further of this Queen's status as 'Water of Earth', a great waterfall crashes through the heavens, lit by the sun as it falls on the Earth bringing life and nourishment. In this case, art may even imitate life, for modern scientific thought now points to the Earth being devoid of water in its infancy. Our oceans are thought to have been provided by comets whose ice melted on collision with our Planet. If this is so, Our Solar System was the nurturing Queen of Pentacles to our World at the beginning of time as we know it. It gave our world water from the frozen cometary stores at its outer reaches and provided warmth from its centre of gravity. Gaia is our Mother, but she is also a daughter of the Sun.

In writing this, I acknowledge the Queen of Pentacles to be the totem for our forthcoming Sacred Tarot Workshop and all our future presentations. We both hope and pray that the space we open up on the 6th June with be both safe and sacred; a nurturing space where those who join us can share, learn, teach, celebrate and be nourished. This is the Sacred Tarot and this is the healing power of the Mandorla. We look forward to sharing our journey with you!


The Sacred Tarot takes place at the Helios Centre, London on the 6th June 2015. For more details and to book one of the few remaining places, visit our Forthcoming Workshops page.

The Queen of Pentacles is taken from a new deck in progress by Chris Butler. Artwork ©2015. All rights reserved.