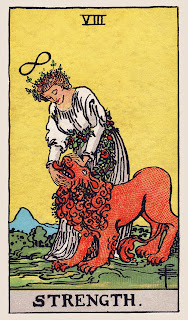 Strength has always been one of the more enigmatic cards of the Major Arcana sequence for me and across the ages of Tarot history it has assumed a number of guises. In one of the earliest decks, a man is shown violently subduing a lion with a club. By contrast, another early deck depicts a female figure carrying a broken stone pillar, allying the card more closely with the cardinal virtue of Fortitude.

The lady and the lion

It's the Marseille tradition that begins to show  the familiar female figure grappling with the jaws of a lion, yet Arthur Edward Waite and Pamela Colman Smith would latterly take up this iconography and develop it further and deeper.

The Rider Waite Tarot was one of the first decks I owned and in the Strength card, a lady in a white dress gently but firmly closes the mouth of a roaring lion with her bare hands. Her hair is braided with flowers and she is crowned with a lemniscate, symbolising infinite power. What I failed to observe for years was the lady wearing a garland of red roses around her waist. I discovered this deck when I was only thirteen and when you're young, you don’t look at things as closely as you should. As I’ve got older, I realise I'd looked at this image so often that I began taking it for granted whilst missing the details.

The lion represents our passions and our strongest urges; the deep and powerful energies emerging not only from our subconscious but also from our primal nature and instincts. If the lady wore only a white robe, the lion would be an abstraction but because she wears red roses, a similar symbol of passion and sexuality around her waist, she becomes linked to the lion inseparably. She owns it as her own. She is both passionate and chaste. Her purity comes from her ability to hold her inner lion under control when necessary. There is no sense of struggle in her facial expression, despite the energy being exerted. This is a woman at peace and a woman who knows her own capability.

The virtue of Strength, Courage or Fortitude is not the absence of human passions. It is the ability to know and experience those passions without being ruled by them. As the lady in white illustrates, Strength and Fortitude are an act of will power and a choice, emanating from a healthy heart and soul. That said, the cardinal virtues are traditionally depicted as female, representing a state of being far more than a state of doing. Subduing the lion is indeed an act of will, but it's one that comes from a house and heart built on solid foundations.