Reversed cards in the Tarot Court 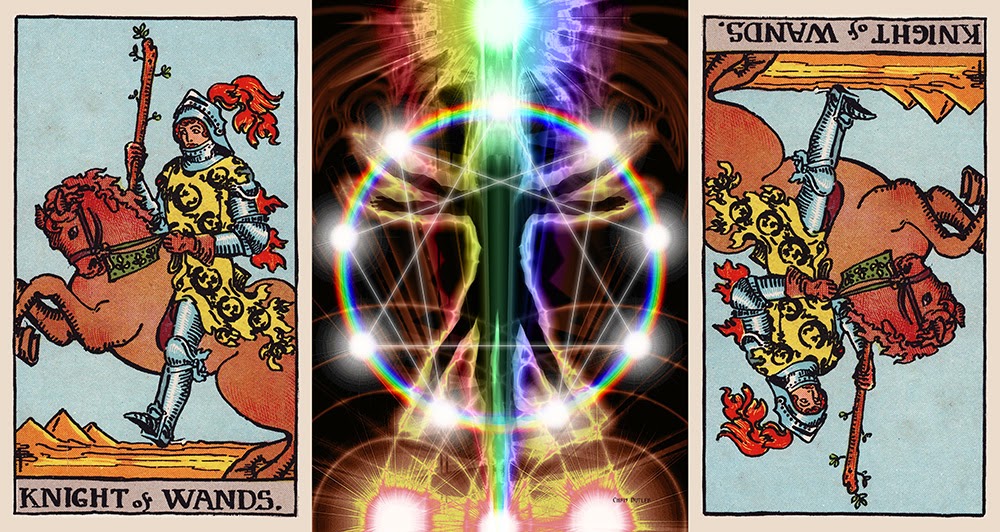 Until recently, I've hardly used reversals in my tarot activities, preferring instead to consider the light and shadow aspects of each card as they appear. Over recent weeks however, I've been fortunate enough to learn a little of the Enneagram system of personality classification and my attitude towards reversals has begun to change, particularly where the court cards are concerned.

A map with nine aspects

The Enneagram diagram is a symbolic representation of the human personality. Its basic foundation is a circle on which nine equidistant points are interconnected by a web of lines/pathways. Each point represents one of nine personality 'types' and the lines represent their interconnectedness. No individual's personality is ever just one 'type' in the Enneagram system. As individuals, all nine factors are contained within us whilst operating to different levels and in different balances. In effect, it's the circle which presents a holistic view of the human psyche and wholeness depends on the balance of energies flowing within the web from point to point.

What interested me most in this system is the way each of these nine personality archetypes has a 'low functioning' and 'high functioning' aspect. High function represents the mature, whole and fulfilled aspects of each type whilst low function represents the immature, the wounded and the insecure aspects of each type. We each contain unique strengths but we also carry unique wounds and these individual 'fingerprints' will determine how each personality type plays out for better or for worse within our own unique web.

Learning the rudiments of this system has cast a valuable new light on the Courts for me. When we view a Court Card in a positive light we are potentially viewing an idealised archetype, whereas the reversal can be seen as a diminished or imperfect version of that same archetype. This isn't the only way to interpret the Courts but it's a potentially powerful one, particularly when dealing with issues of growth and insecurity.

I've used the Knight of Wands as our example. In the realm of fire, he represents aspects of creativity, libido, sexuality and inspiration. Fire is a masculine element and on a more practical level it can represent work energy, transformation and even destruction as well as the energy of life itself. The Knights are always ruled by the element of Air so this is the blast of wind that spreads the forest fire. The Knight storms in and transforms his surroundings. His transformative power is rarely comfortable but it's usually constructive and wholesome. As an artist he can sweep you off your feet with the intensity of his inspiration. As a lover, he'll show you levels of passion you never knew could exist.

In Enneagram terms, you could equate the above description to a 'high functioning' personality. It's an ideal at the top end of the spectrum. Reverse the card however and you find a person whose fiery zeal becomes angry or power seeking. In his selfishness and immaturity he'll sweep the house clean with no regard for the feelings of those around him. Change may also become a tool of control and such a man, if insecure could be a cruel lover; manipulative on an emotional level and selfish on a sexual level. Other people no longer matter in the face of getting his own needs met.

I'm still not fully convinced over using reversals within a reading but where meditating on the cards is concerned, the conscious act of flipping a card upside down is a powerful challenge to examine our own weaknesses and insecurities. The reality is, most of us experience these realities on a continuum. We are neither wholly broken or completely fulfilled and for the most part, our card is skewed in the downward direction or starting to turn upwards.

As for the present, my meditations will involve choosing a court card that I can currently identify with while deliberately turning it on its head. Then follows the uncomfortable question,

"What does this say about me"?