Four of Swords . The Sleep of the Dead. 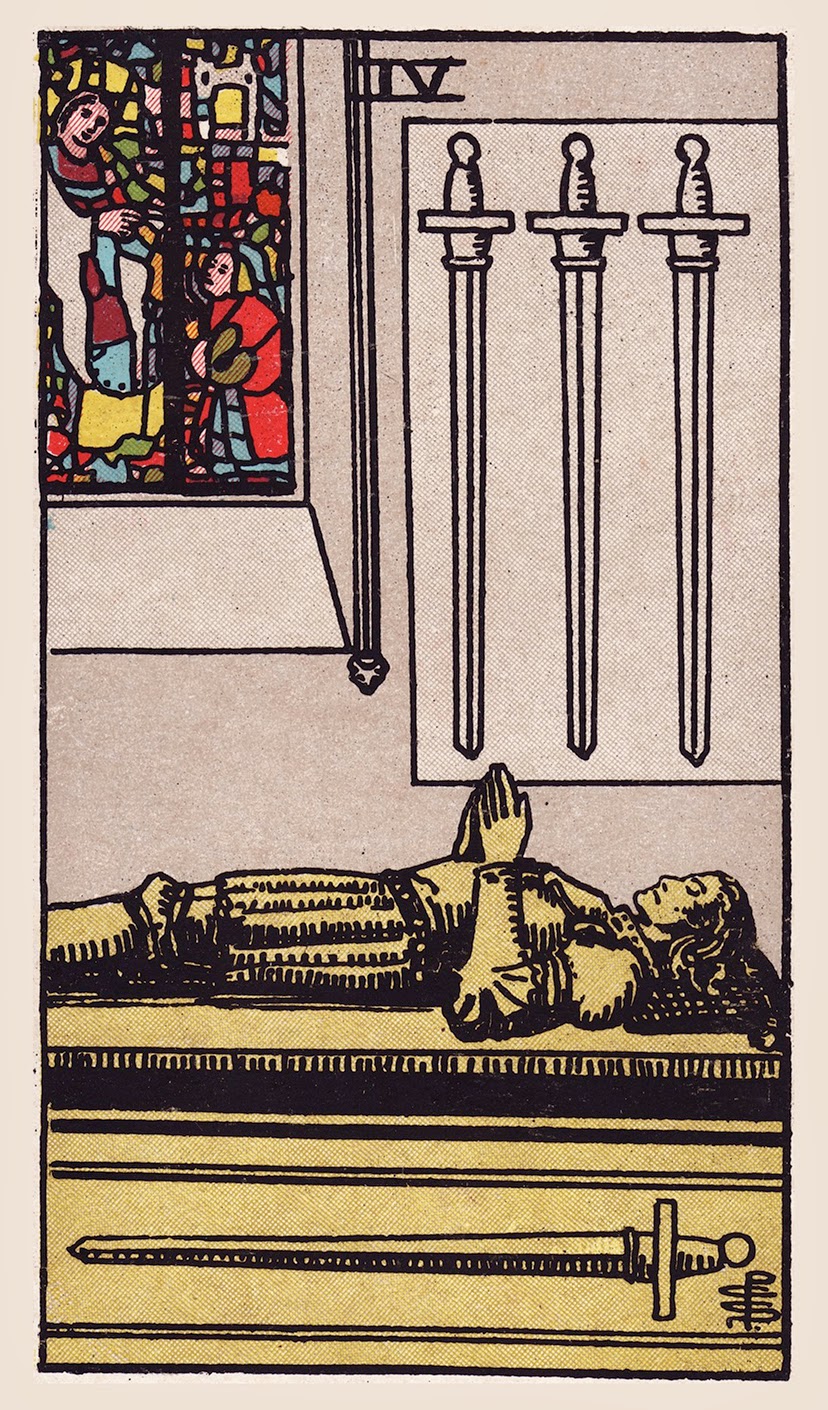 My phone rang the other night and to my surprise, I heard the voice of a friend I hadn't seen in  over a year. If I'm really honest, my first response was a trifle indignant, my inner tape recorder telling me I'd been picked up, then dropped and was now being picked up again for whatever reason.

Stop the tape, rewind and before pressing play, debunk all personal baggage and insecurities as they say, for the situation was not what it seemed. You see, my friend was in what appeared to be a stable, committed long term relationship. What I didn't know is that things were going awry for several years and after much soul searching on both parts they decided to separate, albeit amicably with no recriminations.

Coping with the trauma of loss

I now had to reassess. In my eyes I had been avoided for a year or more. Sometimes calls and emails hadn't been answered. When they had, they were evasive and eventually I gave up the pursuit. I now know my friend was traumatised and in retreat. Despite the amicable split, the demise of the relationship wasn't his choice and he'd spent a painful year doing whatever it took to deal with the changes brought on by the breakup.

My greatest surprise was discovering that he'd moved house; I found it incomprehensible that he could have retreated from everyone in such an extreme manner, both emotionally and geographically. On reflection however, I understand why and in coming face to face with a living embodiment of the Four of Swords, I've learned there are many ways of coping with loss and trauma.

As a person I'm the complete opposite. Faced with crisis, pain or loss, I need to talk, talk and talk until I've talked it out of my system. My closest friends know me well in this respect and thankfully they're caring and tolerant. In crisis I become like a stuck record; replaying the same dialogue time and time again to the patient ears of those nearest to me. This is my way of processing it through. I'm like a pressure cooker with the valve released - the steam shoots out consistently, making the same noise for a while until the pressure's released. I'm very vocal and I need to talk to navigate my way through the grief process until eventually I find my way up and out.

By contrast, my friend needs to retreat in order to grieve. In this instance it took all his reserves just to get through and that meant only having the capacity to deal with as few people as possible. Close family and one or two friends have seen him through but the key here is he could trust they knew where he was at. He didn't have to exhaust himself talking.

What he's been through over the last year is a shock reaction, parallel to how the physical body reacts when seriously injured. When I suffered a serious multiple fracture some years back, I 'blacked out'. I'd heard people talk about this but I'd never experienced it. I didn't lose consciousness but my vision went and my sense of feeling and spatial awareness disappeared. I could still hear but it was like floating in blackness with sound coming at me from a distance. My body was in shock and I now know in such cases that blood flows from the extremities, concentrating around vital organs to keep them functioning, hence the limited loss of sense and consciousness.

To cope with his loss, my friend retreated both into himself, as well as geographically. He withdrew to a secret place, emotionally and physically, only letting a handful of people know his location. In hiding he could survive, learn to cope and eventually learn to rebuild.

In the Waite-Smith Tarot, the Four of Swords depicts the inside of a Church. Three swords are mounted on the wall above a tomb bearing the effigy a sleeping warrior, whilst the fourth sword, possibly his own is fixed to the side of the tomb. Above is a stained glass window, showing what looks like an image of Christ blessing the poor. Look carefully and you'll see his halo contains the word 'Pax'; the Latin word for peace.

The symbolism is powerful indeed. Traditionally, churches were places of sanctuary. If you claimed the sanctuary of the Church you had total physical protection within the confines of the building. No enemy would  dare to desecrate the House of God by bringing conflict over the doorstep. The stained glass is itself a symbol of the peaceful, protected environment but what's most significant is the main protagonist of the card is a dead man. We don't see him in the flesh, we only see his statuesque effigy on the lid of his tomb. Nevertheless, the card's Christian setting points to a belief in resurrection and life after death. Similar themes are expounded in the Judgement card from the Major Arcana.

This man is only dormant and when the time is right, he will re-emerge to live a full life and fight another day. Meanwhile, his sword lies by his side and the weapons that would have done him harm are separated from their owners and hanging on the wall.

When pain and conflict become too much to bear, retreat and hiding may be essential for survival. My friend has woken again and begun his journey back into the wider world. I may not have known where he'd been hiding but it's reassuring to have discovered he was in a safe place.