Even the most painful cards can bring healing. 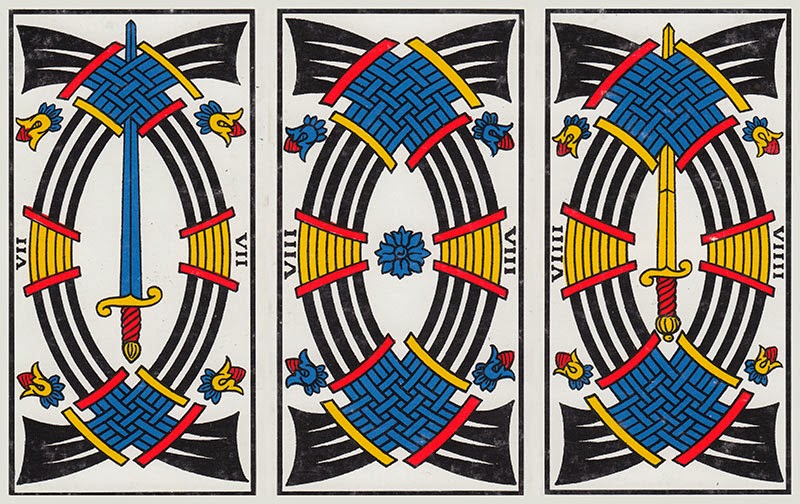 As I've worked with Petronella Phillips Devaney on our workshop materials, I've constantly found myself returning to the earlier traditions of Tarot. One of the great joys of our working together has come from our differences. We read the cards very differently but find that we're learning from each other in an astonishing way.

For years, her only deck was an antique Besancon Tarot; a deck very much within the Marseilles pattern but with two important variants. The Pope and Popess (the Hierophant and High Priestess in modern tradition) are replaced by the Greek deities Juno and Jupiter. The pip cards of the Minor Arcana are of course largely unillustrated, featuring geometric arrangements of the suit symbols, embellished with stylised floral and foliage patterns. By contrast, my preferred learning deck was the Rider Waite Tarot, with its fully illustrated narrative pip cards and its richly esoteric Major Arcana.

I've come to appreciate the power and profundity of the pre Rider Waite tradition in a whole new way through Petronella. Layers of meaning and symbolism within an image can be a powerful tool but then again, so can uncluttered minimalism. A simple image can be an equally powerful trigger for the intuition, sometimes more so, for the card can speak with a more direct voice.

Swords in the Tarot de Marseilles

This was my experience today, for I turned my attention to the Suit of Swords whilst receiving a simple, direct challenge from the Tarot de Marseille. One of the most distinctive features of the Marseilles pattern is the curved, scimitar like swords on the pip cards of that suit. Lay the cards out in a row and you realise they form a pattern of overlapping circles.

In effect, the layout of the swords creates a Mandorla on each card and here is both the challenge and the encouragement. The Swords can be a bleak and frightening suit. There are the obvious connotations of conflict but even the notion of cutting through to the truth can be profoundly uncomfortable. Even so, the Mandorla speaks for itself and if you take one of the more painful cards like the Three with its notions of sorrow, heartbreak and anguish, the Marseilles iconography would indicate that even in such blackness, healing and wholeness can be found.

Think of the sword like a surgeon's scalpel or a lancet. It may be painful to lance a boil but in doing so, infection can be drawn from the body, pressure released from under the skin and eventual relief from pain can be experienced. 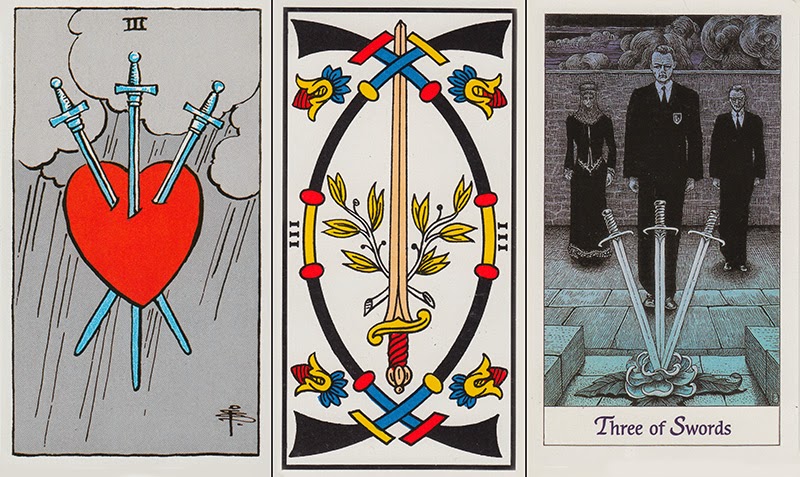 My challenge now is to view some of the other equally uncomfortable cards within the suit and discover the personal messages of healing they might have for me.  The three card images above illustrate the point. On the left, we see the pierced heart in the Rider Waite Tarot. To the right is a rendition from  the Cosmic Tarot by Norbert Losche. Sorrow is depicted as a rose pierced through the centre by the three swords. It sits on a tomb over which three mourners preside. Between these cards is the Three of Swords from the B.P. Grimaud edition of the Tarot de Marseille. A Mandorla is formed by two of the swords while the third golden sword sits at the centre flanked by branches with golden leaves. The gold of the sword and the presence of the golden leaved branches gives me hope. There may be pain but there's also growth here.

I can see some of my own experiences from 2014 reflected in these cards but more than anything else, it's encouraging to be reminded that my pain is neither senseless nor without healing purpose. As I journey through the rest of this suit I'll not only reassess how I've previously pigeon holed these cards. I'll also ask how I've pigeon holed my own past experiences of pain, conflict, suffering and loss. Maybe those very experiences are some of the ones through which I changed for the better.